According to Globocan 2018 estimates, pancreatic cancer representes 2.5% of all cancer cases. This disease usually causes no symptom early on, often resulting in death within a relatively short period of time. The causes and risk factors for this cancer are multiple. Since the chances of survival are low, treatments are generally aimed at slowing the development of the tumour. Progress are expected in the early detection of this cancer, in the development of new treatments or new therapeutic approaches. Thus, Acobiom’s Gemcitest is the first predictive diagnostic of patient response to one of the therapies available in the treatment of pancreatic cancer. 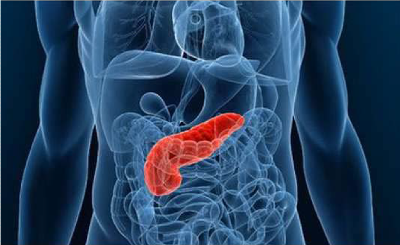 The pancreas is a gland located deep in the abdomen, between the stomach and the spine.

It is made up of exocrine cells and endocrine cells, and it is often described as having a head, body and tail..

The pancreas produces enzymes that aid in digestion (thanks to exocrine cells) and makes insulin and other important hormones (thanks to endocrine cells) that help the body absorb sugar and control blood sugar.

What Is Pancreatic Cancer?

Pancreatic cancer develops when cells of the organs grow out of control, developing a tumor.

About 5% of pancreatic tumors are neuroendocrine tumors (NET), also called islet cell tumors. There are many subtypes of this type of tumor. They often grow slower than exocrine tumors, and are most often benign.

There is no specific cause for this cancer, but there are risk factors that can increase the likelihood of disease development.

The diagnosis of this cancer is made after a combination of clinical examinations, imaging tests, blood tests and tumor tissue. These tests and analyses also make it possible to establish the stage of the disease’s progress.

There is not yet a biological marker that can reliably diagnose pancreatic cancer.

The treatment of these tumours is based on their growth stage.
Standard treatments are surgery, chemotherapy, radiotherapy or a combination of these treatments.

The chances of survival or healing are low.
Only surgery (possible for about 20% of patients), combined with chemotherapy, can lead to the remission of this cancer.

How many people have pancreatic cancer?

According to the International Agency for Research on Cancer (World Health Organization), pancreatic cancer accounts for 2.5% of all cancer cases worldwide.

It is the 12th most common cancer (common position with kidney cancer).

Is the number of pancreatic cancer cases increasing? 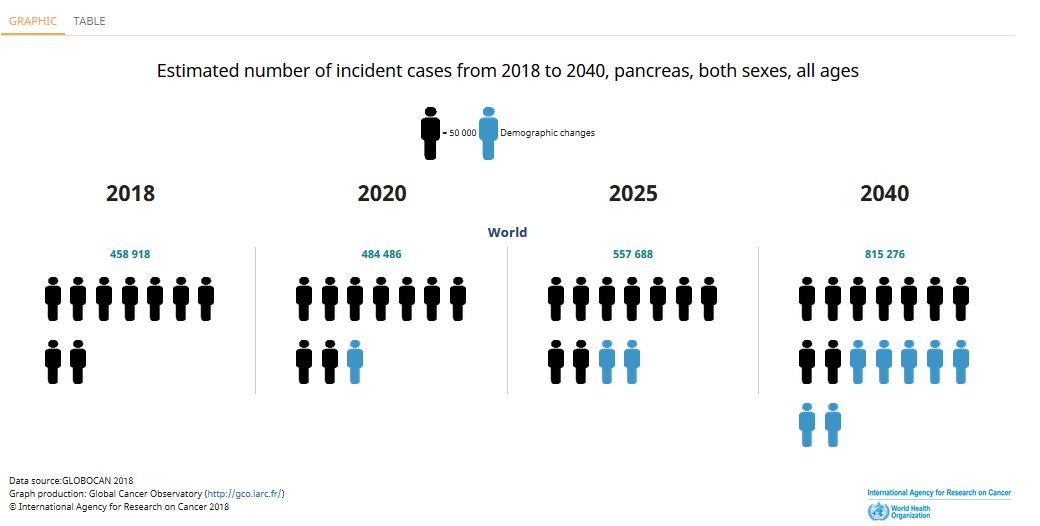 The incidence of Pancreatic Cancer has markedly increased over the past decades.

The number of cases detected has increased in some countries to 120% between 2011 and 2025.
Pancreatic cancer is predicted to overtake breast cancer to become the third leading cause of cancer-related death in the EUand in the USA. The mortality associated with this disease is predicted to continue to increase worldwide.

What is the life expectancy with pancreatic cancer?

Patients diagnosed with pancreatic cancer generally have an unfavourable prognosis.

The chances of survival are low in part because this cancer usually causes no symptoms in its early stages, resulting in metastatic disease at the time of diagnosis.

Median survival (or lifespan) after diagnosis is less than one year; 5-year survival is about 5-10% and complete remission is still extremely rare (American Cancer Society, 2008).

What is the situation of pancreatic cancer in comparison to other cancers? 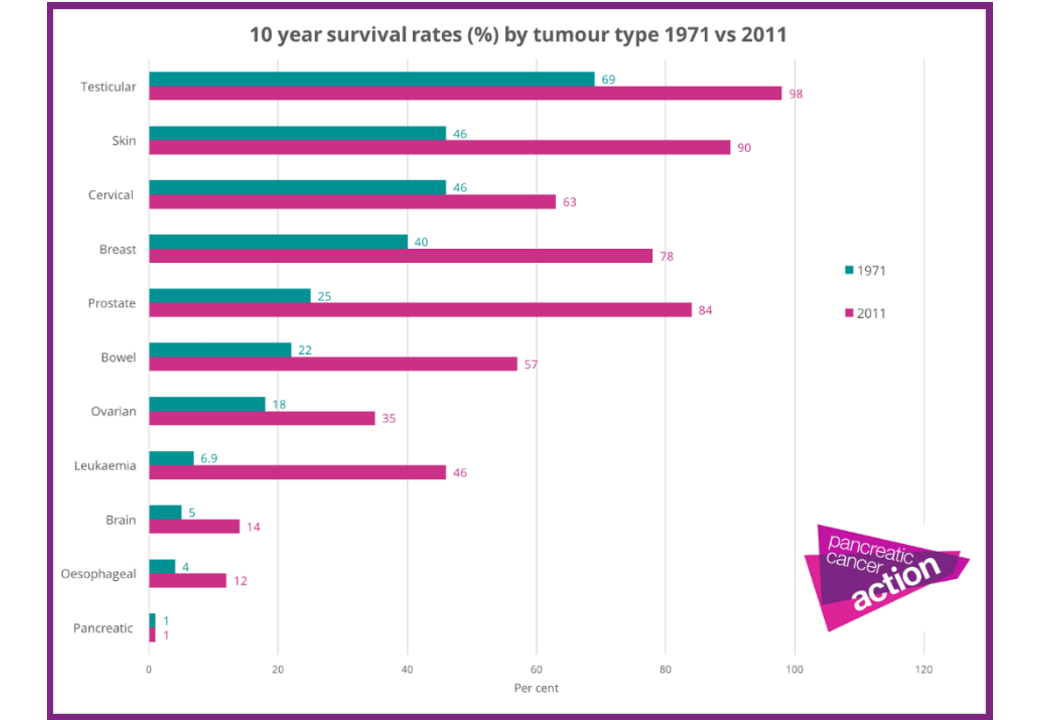 The impact report of the British charity Pancreatic Cancer Action (2015) highlights the lack of progress in the fight against pancreatic cancer for several years. Hence, the 10-year survival rate remains at similar levels to those seen in the 1970s.

To compare with breast cancer (same stages III and IV), the 5-year survival rate for women is close to 72%.

What are the causes of pancreatic cancer?

Cancers, and pancreatic cancer in particular, are complex biological phenomena and are generally due to a combination of causes.

Cancers can be the result of one or more risk factors, even though these diseases can developed in people with no risk factors.

The incidence and prevalence of pancreatic cancer vary widely within and between countries. These disparities result from genetic differences, as well as exposure to certain environmental risk factors.

For instance, levels of smoking, alcohol consumption, as well as the number of people with diabetes and obesity are different in Europe, which contributes to the variation in the incidence of pancreatic cancer.

What are the risk factors for pancreatic cancer?

A risk factor is a parameter that can increase the probability of a pathology or trauma occurring. On the other hand, the presence of a risk factor does not necessarily imply the occurrence of the pathology with which it is associated.

In the case of pancreatic cancer, different risk factors have been identified with varying degrees of certainty. These can be classified into two categories: factors inherent to the individual and environmental factors.

One of the risk factors inherent in the individual is age. Indeed, there is a peak in the onset of pancreatic cancer between the ages of 65 and 85, with a low probability of the disease occurring before the age of 50.

Some risk is also related to family predispositions or genetics. Examples of genetic mutations include the BRCA2 and CDKN2A genes.

Finally, blood groups A, AB and B may also have a higher risk of developing pancreatic cancer.

One of the environmental risk factors is tobacco: a threefold increase in the risk of developing pancreatic cancer, with the risk increasing with consumption and duration of smoking.

However, pancreatic cancer can develop in a person who does not have any of the risk factors listed.

What are the main signs and symptoms of pancreatic cancer?

Pancreatic cancer does not cause generally any signs or symptoms in the early stages of the disease.

As cancer develops, it can cause signs, symptoms, or indications related to the pancreas or other organs of the digestive system.

Symptoms of this cancer vary according to its location in the pancreas: head, body or tail, and the location of the functions the tumor cells: exocrine cells or endocrine cells.

The following symptoms may indicate the development of a pancreatic cancer:

But all these symptoms are always associated with the development of a pancreatic cancer.

How to detect pancreatic cancer?

There is no standard test to detect pancreatic cancer, which makes it difficult to diagnose.

What are the Pancreatic Cancer markers?

Depending on the signs and symptoms caused by a suspicion of pancreatic cancer, several exams and tests will be performed establish the diagnosis.

If the cancer is confirmed, more tests will be done to help determine the stage (extent) of the cancer.

There is no blood test or specific tumour markers to diagnose a pancreatic tumour. For example, a blood test measuring carbohydrate antigen 19-9 (CA19-9) is usually performed, but this biological marker is not specific to pancreatic cancer..

A pancreatic exocrine tumor can cause higher bilirubin and liver enzyme levels in the blood. High levels of these substances in blood can suggest a pancreatic cancer, but these markers do not happen in all pancreatic cancer patients.

What are the stages of a Pancreatic Cancer?

The stage of a cancer describes how the disease has been developing, how it is serious and how best to treat it.

The earliest stage pancreas cancers are stage 0 (carcinoma in situ), and then range from stages I (1) through IV (4). In general, the lower the number, the less the cancer has spread or is difficult to treat.

In Pancreatic Cancer, the stage of the disease is based on 3 data:
1 – The extent of the tumor (T)
2 – The spread to nearby lymph nodes (N) 3 – The spread (metastasized) to distant sites (M)

Other factors are measured to determine the prognosis of the disease:
a) the tumor grade (from 1 to 3),
b) the extent of resection (from R0 to R2).

What are the main therapies to treat Pancreatic Cancer?

Standard treatments are surgery, chemotherapy, radiation, or a mix of these.

As pancreatic cancer is generally detected when tumor cells are spread over the pancreas or when the tumor is began metastatic, the decision-making model is a balance between the patient’s medical condition (side effects, patient’s preferences, and overall health) and the intrinsic characteristics of the cancer (type, spread and stage of the tumor).

The surgery option is chosen to remove the tumor or when a part of the tumor can be resected with the objective to relieve symptoms. About 20% of patients with pancreatic cancer can benefit from a surgery. Surgery is the only potentially curative treatment option in pancreatic cancer treatment.

In pancreatic cancer treatment, chemotherapy is used to kill cancer cells or reduce the tumor size before surgery or radiation therapy.

Here is a comparison of clinical results and the associated costs between Gemcitabine and Folfirinox treatments. 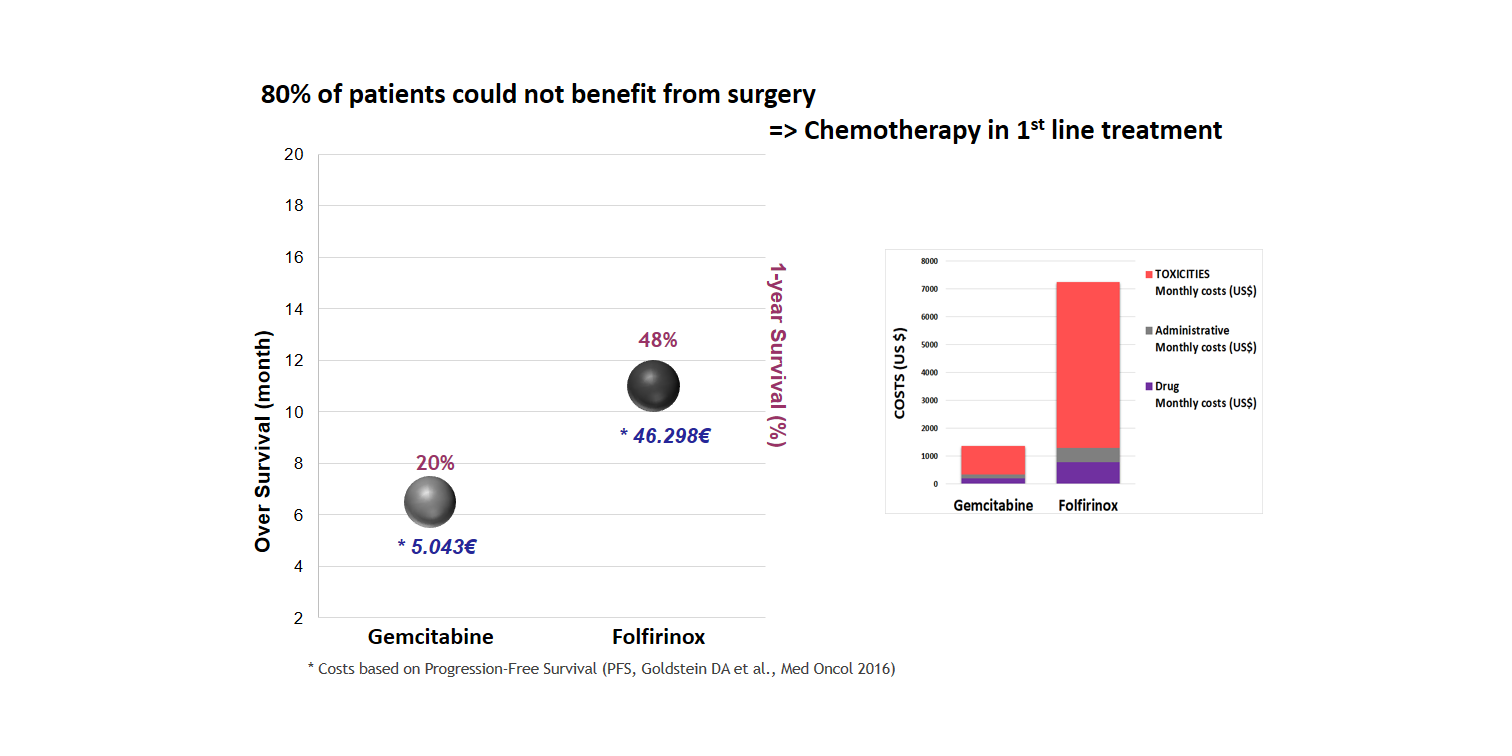 What kinds of progresses are forecasted to improve the therapy efficiency and the patient quality of life during treatment?

As surgery offers today the best chance of controlling or treating pancreatic cancer, the early detection of this tumor is one of the major issues to improve treatment outcomes.

Another challenge is that pancreatic tumors are surrounded by a dense tissue layer, called the stroma. This makes it difficult for treatment to reach the tumor. Researchers are studying ways to get treatment through the stroma to make it more effective.

Also, some cancers have been successfully treated with targeted therapies which block specific mutations. But, these drugs have not been developed specifically for pancreatic cancer yet.

Molecular profiling can give information about the biology of the tumor. Results may align with targeted treatments that work well in other cancer types. As more studies are done, more targeted treatments will be developed and approved for pancreatic cancer patients whose tumors have specific molecular changes.

Molecular biomarkers﻿ (and diagnostic devices) are capable to predict patient response to a particular drug regimen. This approach could help choosing the most efficient therapy or the treatment with the less side effects, with the benefit to increase the patient overall survival and its quality of life during treatment.


To reach some of these objectives, Acobiom developed GemciTest, a predictive diagnostic of the patient’s response to one of the available therapies: gemcitabine.