GemciTest® is an innovative and non-invasive In-Vitro Diagnostic (IVD) that is able to predict the response to gemcitabine-based first-line treatment in patients with metastatic pancreatic adenocarcinoma (mPDAC). This CE-marked IVD based on a combination of RNA markers identifies which patients diagnosed with mPDAC do not benefit clinically from first-line gemcitabine therapy, alone or in combination. GemciTest® is a predictive test of gemcitabine efficacy.

Pancreatic cancer is a “silent” disease that does not cause any symptom in its early stages. The majority of patients have metastases  at diagnosis. For them, chemotherapy remains the only therapeutic option (~75% of patients).
This cancer has a poor prognosis: 95% of patients with pancreatic cancer will succumb to the disease in the short or medium term (5-year survival rate = 5%).

According to a 2021 study by PanCAN and researchers at Cancer Commons and MD Anderson Cancer Center, pancreatic cancer is expected to become the second leading cause of cancer deaths before 2030, surpassing the number of deaths caused by colorectal cancer. Most cancer deaths are caused, and will continue to be caused, by lung cancer.

This medical approach, precision medicine, based on biomarkers or molecular tests makes it possible to improve the drug management of patients, to prescribe to people the most adapted treatment, therefore the most effective (evaluation of toxicity, resistance, etc.), and also to reduce healthcare costs.

Today, several therapies are available in pancreatic cancer treatment.
For instance, gemcitabine, a generic drug, which is used in the treatment of patients with locally advanced or metastatic pancreatic cancer. Therapeutic combination therapies of gemcitabine plus erlotinib and gemcitabine plus nab-paclitaxel, received approvals based on a very modest increase in survival compared to gemcitabine alone; i.e., median Survival (OS) gains of 0.3 and 1.8 months respectively with absolute survival gains at 1 year corresponding to 6% and 13%.
FOLFIRINOX (a combination of four chemotherapies) is the first major advance in the management of pancreatic cancer since overall survival and survival times without recurrence have almost doubled (Conroy T et al. N Engl J Med 2011). However, the population studied in recent clinical studies is limited to patients in “good general condition” (SP 0 or 1)1 with satisfactory liver function2, thus excluding a large number of patients with metastatic pancreatic cancer. In addition, toxicities secondary to folfirinox treatment are important3. Thus, the safety and toxicity profile of folfirinox treatment is considered less positive than gemcitabine.

1. In non-resectable pancreatic cancer, the choice of chemotherapy treatment is made thanks to the scales of autonomy (PS : performance status), which make it possible to evaluate the general state of the patient. The most commonly used are the Karnofsky scale and the Zubrod scale (or ECOG: Eastern Cooperative Oncology Group). The choice of treatment is completed by the data acquired during diagnosis (see §”Description of uses and modes of use”).2. bilirubin levels less than 1.5 times normal3. The grade 3-4 neutropenia rate is 45.7% vs 21% in the gemcitabine group (p<0.001) with 5.4% febrile neutropenia versus 1.2%. Moreover, the occurrence of grade 3-4 diarrhoea (12.7% vs 1.8%) and grade 3 peripheral neuropathies (9% vs 0%) is much more frequent (Conroy T et al.).

Medical interest of the Gemcitest®

Without the support of pharmacogenomic biomarkers, clinical studies show a median survival rate of 6.5 months for patients diagnosed with pancreatic cancer and treated with gemcitabine, with a 1-year survival rate of less than 20%.

In a previous clinical trial, in which patients diagnosed with pancreatic cancer (grade 3-4, non-operable, metastatic or not) were treated by gemcitabine as first-line therapy, blood samples were collected before treatment and overall survival (OS) and progression-free survival (PFS) were measured.

In this context, analyzed the transcriptomic profiles of samples from 60 patients and selected a panel of RNA biomarkers to discriminate between patient populations that have or have not benefited from gemcitabine-based treatment (OS superior to 8.7 months, PFS superior to 3.5 months). 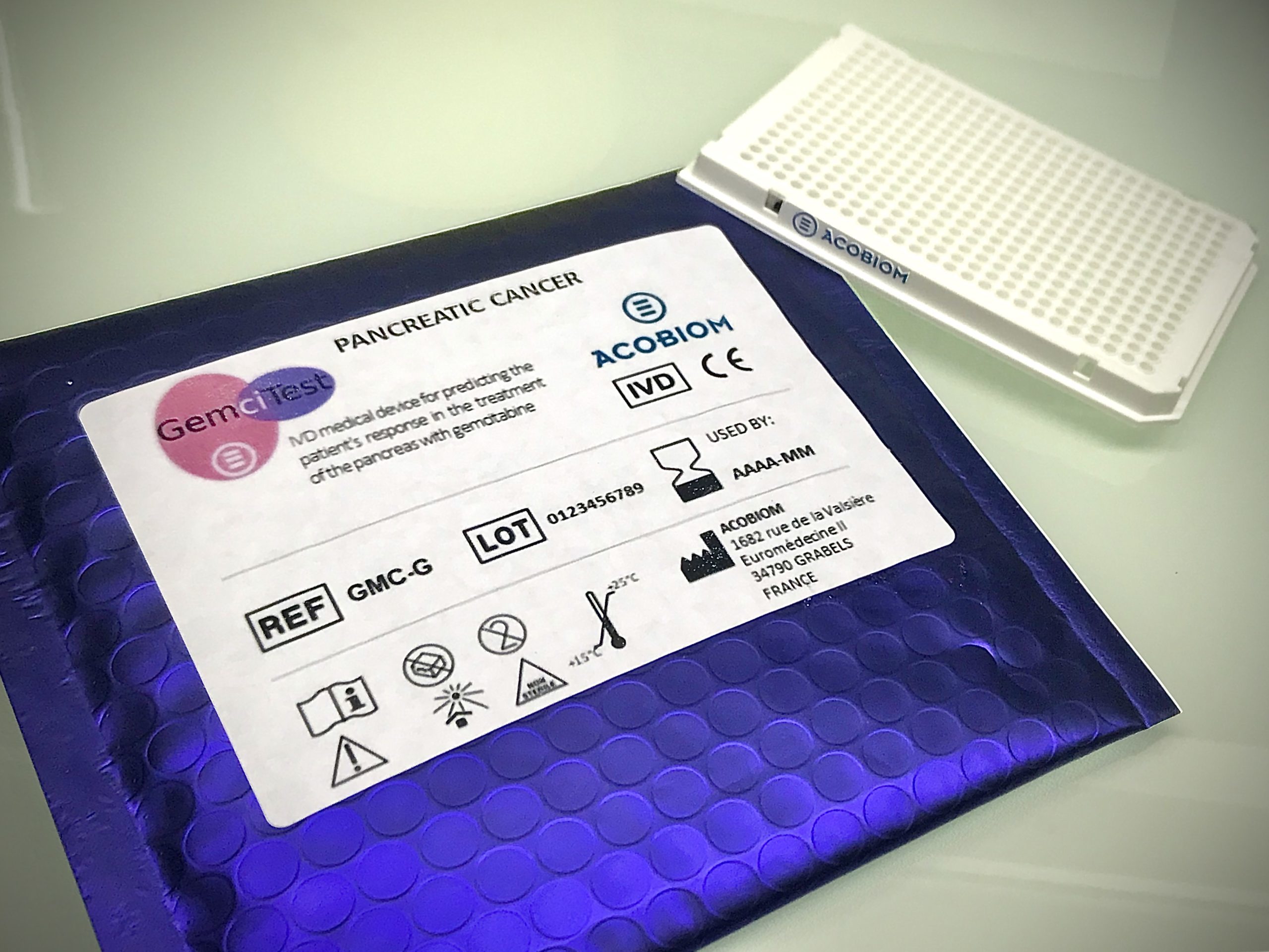 GemciTest® concerns 75% of patients diagnosed with pancreatic cancer and its results will be obtained within 2-3 working days.

Analytical performance of the Gemcitest®

The analytical performance of GemciTest® (effectiveness of In Vitro Diagnosis, repeatability, inter and intra-sample variability, etc.) and its clinical performance have been confirmed (following the recommendations of the health authorities). 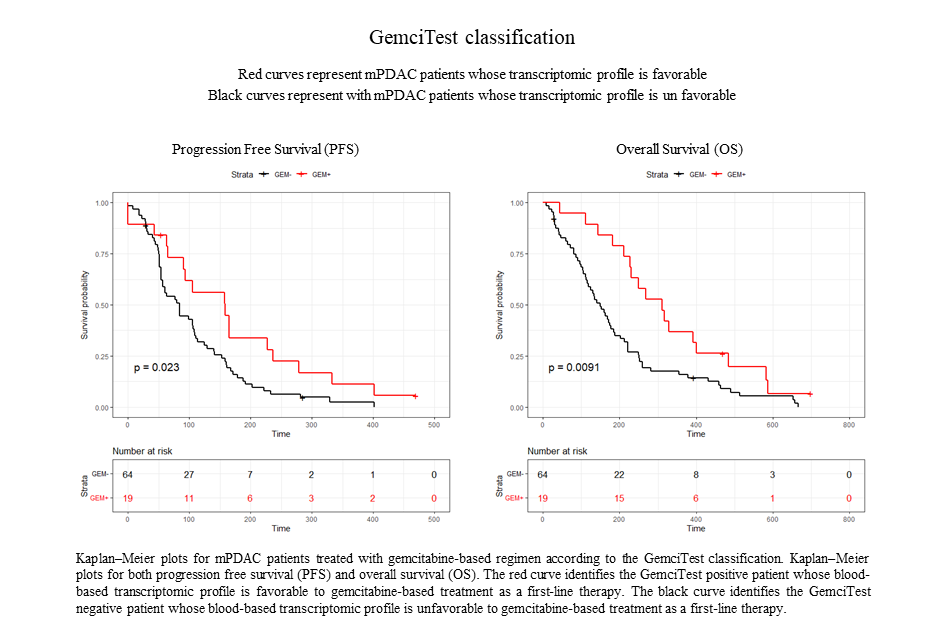 Benefits provided by the Gemcitest®

Today, health actors are facing to several major problems: the reduction of overall expenditure on health systems, the growing need to improve the effectiveness of therapies, while respecting or improving the quality of life of patients during their treatments (reduction in the time taken to treat and inequalities in this treatment between territories).

The quality of life of the patient and the cost of the overall treatment (not just the molecule) in pancreatic cancer were evaluated in the US by a scientific team (Goldstein DA et al, Med Oncol 2016). This study described the monthly costs and overall treatment costs for gemcitabine, FOLFIRINOX and the combination gemcitabine plus nab-paclitaxel (named Abraxane® below). In addition to drug costs, the study includes administration costs and toxicity costs (including growth factor support, blood transfusion and hospitalizations for toxicities). Adverse event administration and management costs are based on Medicare reimbursement rates (a federally administered health insurance system for people over 60) for hospital and physician services. The study indicates that the choice of chemotherapy for pancreatic cancer should be based on the tolerance and efficacy of individualized treatment, depending on the patient’s condition. 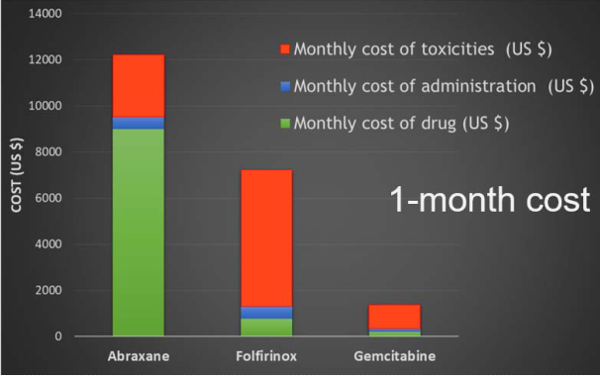 Compared to first-line treatment with Abraxane® or FOLFIRINOX without patient stratification, the use of GemciTest® in the decision-making process is able to reduce overall healthcare costs by 35%, while optimizing the overall well-being of the patient.

Using GemciTest® in combination with Gemcitabine would save costs, but more importantly would benefit patients by reducing toxicity and side effects, and improving their quality of life during therapy.


This innovative diagnostic will have important medical, societal and economic implications:
– Facilitate decision making by guiding the clinician towards the choice of optimal therapy;
– Identify the subpopulation of patients with metastatic pancreatic cancer who will benefit from gemcitabine-based therapy as first-line treatment, with a median survival of 13 months;
– Improve the quality of life of GemciTest-identified patients during their treatments (gemcitabine is one of the least toxic treatments);
– Provide a better quality of life for caregivers (gemcitabine can be administered at home);
– Control and anticipate anxiety-inducing trips to hospitals (already overloaded) and the risk of developing nosocomial diseases;
– Reduce and/or control overall healthcare costs in pancreatic cancer (gemcitabine is one of the least expensive therapies);
– Avoid the prescription of ineffective, toxic and costly therapies.